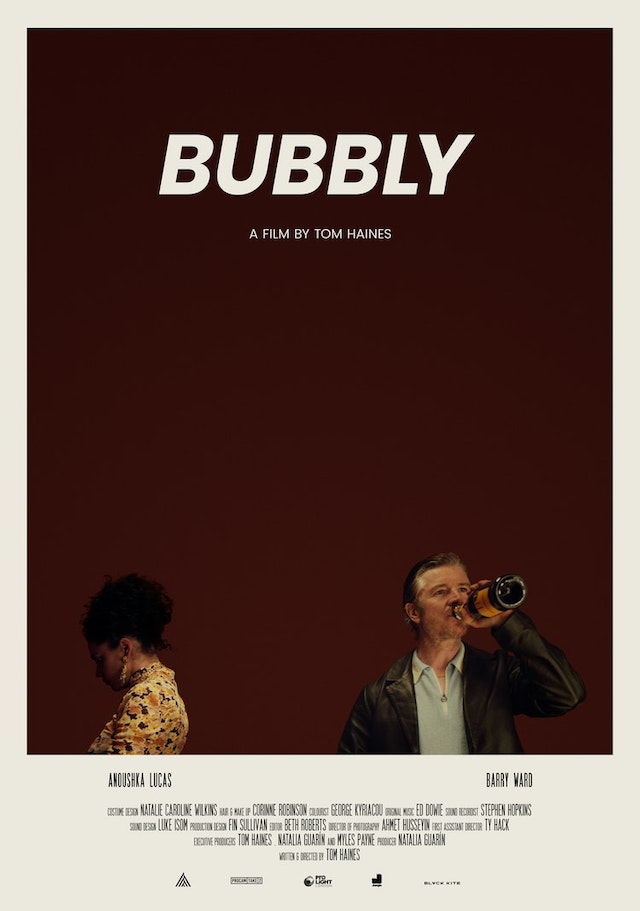 Barry Ward and Anoushka Lucas star in this dramedy about a small time music manager, Ray, about to make it big with singer-songwriter Cas as she prepares to play her break-out gig. But Cas has other ideas. Backstage, with dreams of fame and fortune flowing like cheap champagne, we witness the festivities and the fireworks as their relationship is tested, and Ray does everything he can to hold on to his one shot.

Bubbly is a dramedy that scrutinises a small but explosive moment, at times humorous, at times deliberately uncomfortable. It's chamber piece that holds your attention through bravura acting by Barry Ward (Ken Loach’s Jimmys Hall), and Anoushka Lucas. The film draws on personal observations in the music industry, the power struggle within management-artist relationships, which is often lopsided and manipulative.

In Bubbly we witness the moment the rug is pulled from underneath Ray, a haphazard and desperate man, who hasn’t realised the jig is up. He’s out of his depth and fighting for his life with every weapon he has including fear, negging, flattery, until eventually the mask falls and we see the real human. Cas meanwhile, finds the voice she needs to confront him, knowing that a bigger, better deal is waiting outside the dressing room door, and in their exchanges they both find an emotional truth that neither were expecting.

There’s a touch of Cassavetes or Altman’s freer style to the short: a focus on performance, captured on a zoom lens with long takes, by DOP Ahmet Husseyin - which has that unsettling way of holding on a character until you see the cracks emerge. The film started as a lockdown project in London, January 2021, when I met Barry Ward and we threw around ideas and references, until 'Ray' arrived, and then workshopped with Barry until actor and singer Anoushka Lucas joined us, who added her personal experiences in the industry, and the shady manager's she's dealt with, and Bubbly was born.

It was co-produced by Agile Films, produced by Natalia Guarín, and has an original score by Ed Dowie.